Announced as part of the EFL’s first ever Week of Action, six regional winners have been named Your Move Community Club of the Season for the outstanding work they have delivered off the pitch. The winning Clubs are:
The winners will receive their awards at a special event hosted at the House of Commons on 19 April alongside project participants, staff and volunteers from each Club Community Organisation (CCO).

The overall winner for each category will be announced live at the EFL Awards, 24 April 2022.

Each of the Clubs have made a significant difference to the lives of people living in their local areas, through projects designed to tackle societal issues such as loneliness, food poverty and education, amongst others. 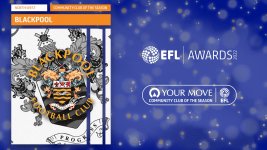 2022 Your Move Community Clubs of the Season

The Club has been acknowledged for its impressive range of projects which include an innovative and adaptable ‘Boro Bus’ enabling the Club to take its community programmes to people who may not normally access these services readily.

Blackpool impressed the judges with its ability to engage with its community in new ways, for example through the development of a new Independent School offering alternate full-time education for Year 10 and 11 students.

From its Community Food Hub used as a main donation point for the city’s food banks, to the development of a new cancer project specifically for residents from underrepresented groups, Derby County’s range of projects were viewed by the judges as ‘outstanding’.

The judging panel were particularly taken with Milton Keynes Dons’ delivery of inclusion projects, with the Club the being the leading provider of inclusion football programmes across the region.

AFC Wimbledon’s significant volunteering numbers and scale of impact in the community made it a clear winner in this category with 850 local people volunteering on its projects over the last year.

Plymouth Argyle impressed the judges with their innovative Green Social Prescribing project, helping to improve the mental and physical wellbeing of those most adversely affected by the pandemic.

All 72 EFL Clubs, through their CCOs deliver a wide range of projects 365 day per year focusing on improving health and wellbeing, raising aspirations, realising potential and building stronger, more cohesive communities. Using the appeal of football, EFL Clubs collectively invest over £59m in their communities annually.

Established in 2006, the EFL Awards is an annual gala event which celebrates excellence both on and off the pitch.

Brilliant news that shows the club is back at the heart of the community.

Missed this , with the derby dominating . Congratulations, yet more evidence of a custodian of a football club ... delivering on promises made