There will be an event which is being organsied by Chris Hull Jnr at The Morty Statue on the Weds 26th May @17-45 hours .This to commemorate Mortys 100th birthday .
There will be a short speech by the former Blackpool FC wizard Tony Green and then follow on to the Armfield Club for a celebratory drink and starting at 18-30 hours there will be a short film with some footage of The 1953 FA Cup final and some never seen before pictures of Morty.
Also there will be some Morty posters for sale(attached) and proceeds will be going towards funds to the homeless people in Blackpool.
Also for sale will be a book written by Blackpool Football Clubs historian Gerry Wolstenholme which is about The life and times of Morty .(Details on how to purchase the posters and books will follow)
Hope to see you all support the event and you will also see all the hard work the lads have done at The Armfield Club ,lets give them our support . 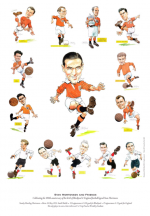 Is it a ticketed event or just turn up ?

TwelveAngryMen said:
Is it a ticketed event or just turn up ?
Click to expand...

RSVP Chris Hull on Twitter via DM or DM me on here ,Chris is asking people to be socially distanced at the statue if they just turn up .
F

Will be there to acknowledge our great history. Also does anyone feel we should have a statue outside the ground of our only
''Playing'' World Cup Winners Medalist Alan Ball ( Only 11 of them)
D

In the Armfield it has to be table service only to groups of 6 or less. Roll on 21st June when all limits should be lifted. Fingers xxxx

I'll be over for this. He deserves all the praise he gets. A true legend

Really looking forward to this

If I’m at home I’ll get there.....is it 6 to a table and all that malarkey etc at that stage of easing lockdown?

My connection with Stan was that his wife Jean was my 4th cousin. Robert Walsh who played for South Shore and Blackpool was our Gt. Gt. Uncle.
C

is the Armfield Club actually on Bloomfield Road? I'm trying to place it.

coppiceman said:
is the Armfield Club actually on Bloomfield Road? I'm trying to place it.
Click to expand...

Yes, diagonally opposite from the Jimmy Armfield statue, what was the Number One club.
C

coppiceman said:
is the Armfield Club actually on Bloomfield Road? I'm trying to place it.
Click to expand...

Thank you, I know exactly where you mean now. I think I may have been to a BST meeting there during the court case.

coppiceman said:
Thank you, I know exactly where you mean now. I think I may have been to a BST meeting there during the court case.
Click to expand...

You will have been yes

What a player and by all accounts what a good bloke too. My dad still talks about Morty far more even than Matthews, and I even named my cat after a player long before my time :)