What we can learn from our start to the season

This one could split opinion but feels like one that needed to be written. Put some thoughts down in terms of what can collectively be learnt by us as a fanbase after our start to this season.

Would Neil Critchley have been afforded the time to turn it round if the stadium wasn’t empty?

Opinion: What we can learn from our start to the season

When you think back to the first few games of the season, many a Blackpool fan will shudder and think of the comments they made on social media – and rightly so. This season was unique in tha…

Somebody started a controversial thread on twitter didn't they where they'd screenshotted a bunch of tweets of people saying Critchley Out/ranting about Critchley needing to go after a defeat (can't remember which one), the worst thing about that was they were all directed at the official Blackpool FC twitter account which Mansford and co. have stated in a fan forum that they actually read - I can't imagine what they made of that.

The defence was that hindsight is wonderful, and that we all had doubts. And whilst we all certainly did have doubts (anyone who claims they didn't is probably lying) there is a huge difference in doubt and calling for a managers head after a handful of games. Perhaps a huge exposé on twitter is a bit extreme though!

It almost certainly could have been a different story had fans been in for that poor run, you can translate the angry tweets into boo's and shouts of "Critchley Out" at Bloomfield Road without a doubt. That sort of atmosphere could have been detrimental for various reasons, many of which you've stated in your article. They have certainly benefitted without crowds, but now they'll be feeling the negative side of that going into these fixtures where crowds would be a massive boost, so it is a bit of a double edged sword really!
Last edited: Apr 7, 2021

utmp said:
This one could split opinion but feels like one that needed to be written. Put some thoughts down in terms of what can collectively be learnt by us as a fanbase after our start to this season.

Would Neil Critchley have been afforded the time to turn it round if the stadium wasn’t empty?

Opinion: What we can learn from our start to the season

When you think back to the first few games of the season, many a Blackpool fan will shudder and think of the comments they made on social media – and rightly so. This season was unique in tha…

It didn’t help that before the season players were coming out with the promotion and nothing else will do. Maxwell was the prime advocate of this. The way we played against good teams amplified it to Big One lift hill proportions before a ball was kicked in anger and then the carriage went down the hill at 65mph.

maxwell said as much, the whole club was too confident and got a rude awakening. It wasn’t impatience it was expecting the basics, building on the basics and competing....and the team not delivering them. And things deteriorating rather than improving to most (not all..Hazi and Voy et al were the mystics which saw through it all. Most kept patience though...very very few took it as far as wanting the manager to be potted.

Great article spot on, I would like to think that the majority would of drowned out the minority. UTMP

It was because Critchley needed time to get the players to gel that I started posting a monthly progress chart, comparing our progress with that of the side promoted from League 1 in 2006/07. That season had an awful start, 11 points from 11 games. The Perfect 10 dvd made following promotion had the likes of Keith Southern and Andy Morrell saying that they were a bunch of strangers at first and, of course, it takes time. But I'm not holier than thou; I ranted on here at Critchley and in 2006 I ranted at Grayson as I left the ground early and despondent.
So my answer to the question whether Critchley would have survived the brickbats from outraged fans in the ground is, yes and we would be where we are now - full of hope and expectations.

Dont run before you can walk

Then once you can walk, run like F*CK all the way to the Playoffs

Recruit your most important players before the first game of the season, not the seventh (although appreciate it's not always possible).

BFC_53 said:
Recruit your most important players before the first game of the season, not the seventh (although appreciate it's not always possible).
Click to expand...

As you say it is not always possible. I believe the Gretarsson and Ballard deals took nearly 6 weeks to complete from intital approach. Suspect Dougall (and possibly Stewart) took a while to land (both were looking to stay in the Championship) which meant we ended up with the likes of Sarkic and Williams.
A

It takes time to put an entirely new squad together and get them to know each others style of play.

I hope we "learn" that if you want objective analysis of a situation, Twitter isn't the place for it. Neither are Blocks A and B in the North Stand, if Grayson's tenure is anything to go by.

All fan bases have some absolute whoppers in them. We are no different. I hope the club has appreciated that.
V

I'm not a mystic and I expected a better start, results wise, after the preseason we had. I was just shocked by how people turned against the manager so quickly, and it seems utterly wrong to me, and counter productive. What happened to getting behind people? Being grateful for Sadler and all his spending? Giving people a chance and time to sort things out. Which all seems completely straight forward to me, there's not really a debate to be had. People decided he wasn't good enough and it turns out he is. So they were wrong!
A

In my view, the best Manager (and Management Team) we have had in a long long time.
Of course I have only been supporting them since 1964 but I can't think of a better one, in terms of how logically he assesses things, from the opposition, to the questions he is asked in interviews. He is also extremely knowledgeable about the Game and appears to be well liked by those around him.
M

It was inevitable that the start would be difficult, although the problems probably went on longer than they should. Better late than never though and right now it’s all come good.

Can’t wait to get back.

Every credit to Critch he had a lot of sorting to do when he arrived.

Grayson left a lot of dead wood in the squad and sifting through that all takes time. He took chances with new players and it takes time to train new players.

The start we had results wise was poor but the football we were playing was far far better than under Grayson.

People seem to forget the garbage Grayson offered up and the virtual immediate change Critch gave us.

I had every faith in the man.

In my opinion, all you have to do is look at the positions in the table Blackpool now holds and where Fleetwood, who were well ahead of us at one point, are now.

There were great expectations at the start of the season, and the Plymouth game was a pointer on what was going to happen. The team had had a wonderful pre-season, overall, and anticipation of a great start to the season was high amongst the fans, I was one such fan. When the reality of how a new team takes time to gel dawned on the 'want it now brigade' there was bound to be a certain amount of frustration amongst them, so, instead of looking for signs of improvement, which were there, their immediate reaction was to lash out at all and sundry because other more established teams were finding a way through. I forecast the same will happen again if we lose a couple of games in the run in.

Football fans the world over are experts in everything on and off a pitch, they want their team to win, they know better formations than their coaches do, they berate a player who is struggling and shout for a manager's head at regular intervals.

In short, therefore, ignore the calls and get on with the job, Critch has proven that he is the expert and not any of us.

abt1835 said:
In my view, the best Manager (and Management Team) we have had in a long long time.
Of course I have only been supporting them since 1964 but I can't think of a better one, in terms of how logically he assesses things, from the opposition, to the questions he is asked in interviews. He is also extremely knowledgeable about the Game and appears to be well liked by those around him.
Click to expand...

Great point and those who appointed him knew that. It's hardly surprising he took time to find his feet after coming from youth football but the impressive thing is how quickly he has got to grips with L1 football. We are looking very impressive now with some big players still missing. I'm sure he would have found it much harder with the crowd on his back.

Agree and the fact he had no FL experience was something that was used against him early on when people rightly had doubts. Will be interesting to see how the atmosphere is if we go through a tricky spell next season

1. Get your players in early, and don’t wait till the end of the window and seven games in, to start your campaign? (Disclaimer

unless that was only when they were available? I suppose we’ll never know whether that was the case).
Or
2. Trust the process

good point about what would it have been like with fans in the ground? Would they have got on the managers back?
or
Would they have roared them on to success?

Credit has to be given to the owner and board IMO, just my opinion and not fact.
He/they backed Critch in the summer, it didn’t go particularly great at the start, he/they then instead of panicking and replacing the manager, backed him with extra players and better players (granted some would of been planned some possibly not?) plus he/they brought in an assistant of quality. Also they backed him again in January.

Ali Maxwell discusses our poor start and our form since then in this piece about EFL teams making a strong finish to the season. It'll make you feel we are invincible, which we are not! Go to 4.15... 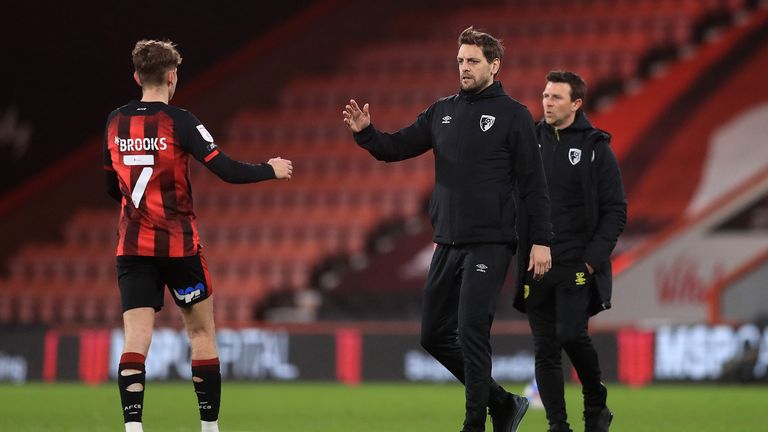 EFL: Ones to watch

Ali Maxwell from the Not The Top 20 podcast picks out some players with a bright future in the Sky Bet EFL.

It’s good to know now that we have an ambitious owner, he & the board will have formulated a business plan covering the next few years , & they understand that we don’t panic after some poor results early on !

Would Neil Critchley have been afforded the time to turn it round if the stadium wasn’t empty?
Click to expand...

What a ridiculous statement!

HatfulofHollow said:
What a ridiculous statement!
Click to expand...