Apologies, I thought he had returned to Liverpool.

I've heard Woodburn is on fire at the moment and just needs a spark to get things ignited.
You might get some interest from Forest though.
L

The general consensus at Oxford is that he was a bit hit and miss as a number 10 or on the right, but improved when played as a CM. Good passer and dribbler and can tackle as well but not the quickest. 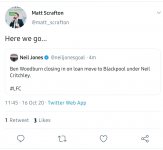 That would be a WOW signing

GJJW said:
That would be a WOW signing
Click to expand...

Exactly the kind of signing we need.

And another full international with 10 caps and 2 goals for Wales already.
K

Now this would be a good signing.

This needs to happen

Alan Nixon, who isn’t usually wrong, also said we are trying hard for him.

Interesting signing if it works but not sure.
B

Hopefully a loan till the end of season

Great signing if it comes off. Would feel a bit wow to me but maybe that's because I have signed him on FIFA for us every year since he made his debut for Liverpool!

Only question is how much the injuries last season have affected him, and I would wager not very much if he still got into their playoff squad on return. He has always been lauded for his attitude and dedication to fitness at all of the clubs he's been to, and of course the academy, so if anybody is capable of getting their progress back on track it's him.

The story's now starting to appear in all the LFC fan sites.

He's been playing in their Premier League 2 games and made the bench for Wales in 3 of their last 6 matches, so you'd imagine he is fully fit and somewhat match sharp.

The icing needed on the cake UTMP

TANGERINETOWERPOWER said:
The icing on the cake will be this and another quality midfielder we so desperately need
Click to expand...

We still need someone to replace Ward who will be capable of doing the hard work in the middle.
G

We need more cake before we put the icing on it!